A work of both deep religious conviction and artistic breadth, Monteverdi’s Vespers for the Blessed Virgin also represented some pragmatic peacocking. Many scholars agree that he composed the Vespers of 1610 to show off his talents and advertise for a better gig. Centuries later, this setting of the traditional Catholic evening service still highlights Monteverdi’s skill and imagination across a range of techniques and moods. He sounds at home in both the ancient polyphonic church style and the accompanied vocal style he championed through his operas. Solemn contrapuntal choruses, virtuosic duets and trios, gorgeous arias, and colorful instrumental scoring combine into one powerful whole. 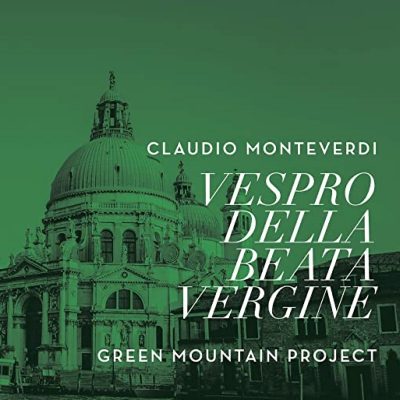 The Green Mountain Project, created by New York-based TENET Vocal Artists, has made a specialty of the Vespers and other Monteverdi works. Their moving performances have earned them critical acclaim for more than a decade. They last released a live recording of the Vespers in 2013. This album captures their final performance from New York’s Church of St. Jean Baptiste in January 2020. The ensemble of two sopranos, two altos, two basses, and four tenors sing one voice per part — TENET artist director and soprano Jolle Greenleaf’s choice based on historical practice and musical lucidity. The orchestra contains six strings, a continuo of three theorboes plus organ, and the Dark Horse Consort’s four sackbuts and two cornetts. Of the two versions of the “Magnificat,” GMP chooses the one with instruments and doubles vocal parts with instruments in other movements.

The Vespers sections would have been selected for religious services, and GMP emphasizes the music’s church origins. Yet, instead of an opulent cathedral, their interpretation has the refreshing immediacy of a community parish. From the opening ritornello of “Deus, in adiutorium meum intende,” this is an earnest, direct, at times austere, yet always engaging performance. The ensemble finds the music in each syllable, meaning the texts are always clear. Tempos and dynamics stay within a modest range, meaning the altar never turns into an opera stage. There are no exaggerated effects or interpretive novelties to grab the ear. It’s just Monteverdi’s score and these sensitive performers.

Their sympathetic blend allows for organic transitions in feel and texture, like those in the “Dixit Dominus.” All eight parts of “Laudate pueri” come through in a transparent, unadorned fashion that makes for heartfelt praise. The basses’ rich, well-articulated sound creates an especially haunting “Et misericordia.” Tenor Aaron Sheehan‘s seamless lines and shapely ornaments in “Nigra Sum” suit the proud lyrics. Sopranos Greenleaf and Molly Quinn’s straight tones intertwine beautifully in “Pulchra es” and make the unexpected harmonic turns that much more jarring. Even with the two tenors’ ornate runs in “Gloria Patri,” there’s still a sense of convincing composure. The instrumentalists get a chance to shine in the “Sonata sopra Sancta Maria.” Instead of playing up the dance elements into a courtly jig, their open, airy sound and regular phrasing give this multi-sectional instrumental an ethereal quality.

The Vespers have rightly earned many versions in the catalog. They range from theatrical (Nikolaus Harnoncourt), warmly reverent (Jordi Savall), resounding and bright (John Eliot Gardiner), refined (Philippe Herreweghe), and energetically worshipful (Martin Pearlman). This recording offers the well-known piece in a pure, at times stark light. The Green Mountain Project has the experience and affection for this music to let it unfold naturally. It may be bittersweet to hear their final recording, but they leave behind an important and inspiring legacy.

Andrew J. Sammut has written about classical music and jazz for All About Jazz, The Boston Classical Review, The Boston Musical Intelligencer, Early Music America, The IAJRC Journal, and his blog. He also works as a freelance copyeditor and writer. Andrew lives in Cambridge, Massachusetts, with his wife and his dog.